If you have any pictures or additional information on Gruning's, please send them to BGriswold @Griswold.com.

Gruning's was a family-owned chain of stores in New Jersey that sold food, ice cream, and chocolates.  It was started by William August "Bill" Gruning in 1907 and eventually taken over by his son Herman Gruning (1917-2017). Herman's son James Gruning briefly got involved in the business from 1975-1982, but did not remain involved for long.

There was originally a single store in Newark.  That store was sold in 1970-71 and the name was changed to Brunin's.  The store had no connection to Gruning's and did not sell Gruning's ice cream or candy.

Everything was sold in November of 1983 - the stores, the brand, everything.  Shortly thereafter, a store in Denville, NJ briefly opened up - not under Gruning's ownership but using the Gruning's name.

The Best Vanilla Ice Cream I Ever Had
by Bill Shaw (ShawW@wpunj.edu)

Wasn�t sure if this was something you wanted to know about for your website.  Thanks for posting the site.  They had the best vanilla ice cream I ever had.

We would make Grasshoppers using cr�me-de-menthe, cr�me-de-cocoa, heavy cream, and Gruning�s vanilla ice cream.  I have never found anything even close in quality.

After discussing our childhoods with a neighbor, and the subject of Gruning's being part of the conversation, nostalgia made me look up Gruning's on the computer.  I was amazed that people were still discussing Gruning's!

I remember playing in the alley behind the Newark Gruning's, helping fill the candy trays, watching my grandmother make the most beautiful Easter baskets in the Gruning's basement (there have never since been baskets of that quality), and playing with the children of a Gruning's waitress in their apartment above the Gruning's store.  After we moved to Livingston, I would still go to "work" with my father and always loved "working/playing" in and around Gruning's.

When we moved to South Plainfield in the early '60's, my mother would take my brother and me to Gruning's in Plainfield once a week (as if going there wasn't treat enough, it was especially nice since we still were part owners and didn't have to pay).

At some point (details are hazy), my grandfather died and my father became part owner but sold his shares of the stores and that ended our dealings with the stores.  But, in the early days, Grunings was a huge and happy part of my life.

Someone mentioned there was a Gruning's shore house in Lavallette.  AMAZING!!  I have pictures of my mom, dad, and me as a baby at that house.  This is surreal!

See a Gruning's billboard that says "I Scream for Gruning's"

This is a painting done by my grandfather, Alexander Collani. It is about 5� by 24� and is a scale �model� of billboard art he painted in the NJ area. Between 1920 and 1944

I may have other B+W photos of billboard art from my grandfather�s portfolio.  Most are 1x3 inch cropped pictures. This on was hand painted as demonstration art, He only kept the ones he particularly liked when he retired

Wet Walnuts!  That was the key!  Memories from the personal website of Steve Weintraub.
http://www.dalahus.com/2008/07/05/grunings/

Last night I was sitting at my dining room table up here north of Boston, eating one solitary spoonful of Ben & Jerry's chocolate chocolate chip ice cream and saying to my husband, as I often do, "good -- but not as good as Gruning's" -- and it occurred to me to google Gruning's, and your fine web page  popped up. A delightful evening resulted and I just wanted to thank you. The menu is an especially nice touch!  I grew up in Fanwood in the 50s/60s/70s and all I can say is all the various cars we had over the years knew the way to Gruning's in Plainfield by heart.

ME: chocolate chip, coffee chip, peach. Chunks of chocolate look good in ice cream but they never match the flavor of the zillions of tiny flecks that Gruning's put in theirs. Also, I loved the twirly stools.

POP: chocolate chip, vanilla, almond crunch (that's what the '83 menu says, but I think they may have called it buttercrunch in ye olde days).

MOM:  Black raspberry, mint chip. Or, a handpacked pint, half chocolate, half lemon.

Our cat was particularly fond of peach.  Don't get me started on the hot fudge and wet walnuts. Gruning's was also our source for tiny and delicious licorice jelly beans.  Thanks, this made my evening --

It is my understanding that the Newark store closed a few years after the Newark riots.  The effect of the riots did have an effect on the store losing business.  My late father, Mike Maloney was a night manager at the Newark store for many years. (He was a postal worker in South Orange during the day.)   I believe he left in 1968, a year after the riots.  There was a biography on baseball player/spy Moe Berg out around 10 years ago (Moe Berg used to hang out at Grunings, Newark at night.).  Grunings and my father are mentioned in the book.

The factory (and my family's house that we rented at 60 Taylor Place) was actually in South Orange.  My father worked at the Newark store.  There is presently a bakery and/or restaurant in the original store on South Orange Avenue.  The factory was in between my old house and the store.
I have a vague recollection of playing with Billy Gruning at the beach houses in Lavalette (mid 60's).  He was around my age-- I was born in '58.

My family lived at 60 Taylor Place for 11 years (1958-69),the house behind the old Grunings factory in South Orange. My father worked at the Newark store.  There is presently a bakery and/or restaurant in the original store on South Orange Avenue.  The factory was in between my old house and the store. We also vacationed at Camden Avenue, Lavalette at beachhouses owned by the Grunings Family.  I have a vague recollection of playing with Billy Gruning at the beach houses in Lavalette (mid 60's).  He was around my age-- I was born in '58. 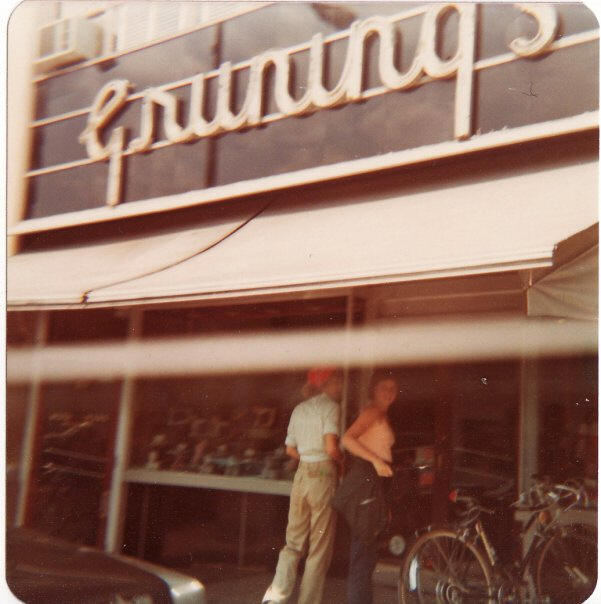